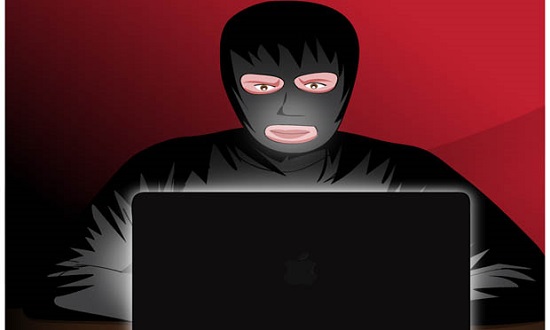 But it’s already too late to put the sword back in its place. The Internet, the Worldwide Web, Google Search, social networks, and other on-line miracles have given billions of people capabilities they never had dreamed of. But in their haste the makers of these tools have also enabled evil-doers capabilities beyond the masses’ worst nightmares. History is full of other technological advances that have been used for both good and evil purposes, but more recently cyberattacks have permitted individuals or small groups, sitting in safety at their personal computing devices, to wreak havoc on millions of innocent victims. These cyberattacks appear to be increasing in frequency and scope of havoc. Most recently several news sources reported the charging of an Iranian hacker on March 24 of his 2013 attack on a dam in Rye Brook, NY, which he found vulnerable using a technique called Google Dorking. (The wheels of justice certainly turn slowly … especially compared with the speed of computers and their hacker masters!)

Apparently he did not use his knowledge to operate the sluice gate of this small dam (perhaps because it was disconnected from computer control at the time). And although this dam is in a rather backwater community (pun intended) and not much of a threat to national security or even significant injury to people or damage to property, the ability of the hacker to infiltrate the computer system demonstrates a capability to attack a much bigger and more dangerous dam or other strategic infrastructure such as an electric power grid.

The really scary thing is that almost certainly many other sectors are under similar attacks. One such sector is hospitals. Within the last two months the computer systems at the Hollywood Presbyterian Medical Center, the Methodist Hospital in Henderson, KY, and the MedStar Georgetown University Hospital in Washington, DC were crippled by cyberattacks. These were not minor incidents; the overall MedStar 10-hospital group has 30,000 staff and 6,000 affiliated doctors. And patients in critical condition could die from the delays caused by inoperative computer systems.

Another sector is financial. On March 29 hackers breached the security at two large law firms whose giant Wall Street banks and corporate clients are constantly dealing with confidential matters, knowledge of which could net hackers millions of dollars through insider trading.

The general populace can only hope that the responsible governmental agencies are working hard to identify strategic facilities throughout the U.S. and its allies, and alert vulnerable ones so they can take steps to minimize the dangers from Google Dorking and other hacker nastiness. And also hope that “white hat hackers” (the good guys)–the modern-day equivalent of yesteryears’ vigilantes—step up their activities. It would help considerably if these strategic facilities would reward these hackers for their efforts. 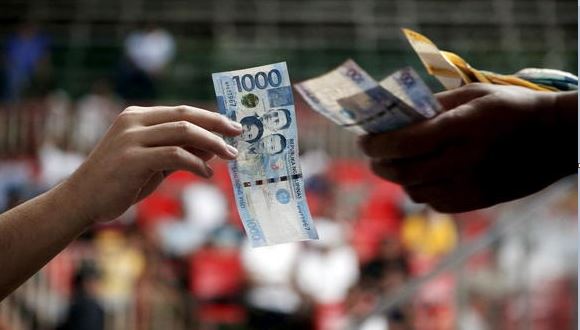 Technology does not exist in a vacuum. It is created by humans of varying degrees of ability and honesty. And technology involving the Internet is generally so complex, and created under time pressure, that it is more error-prone than more cautious and patient people would like.

According to the New York Times, slack security at the New York Fed (that’s the Federal Reserve Bank of New York), which most folks would consider a bastion of safe-keeping, allowed a bunch of money ($81 million or $100 million or some such sum) that rightfully belonged to poverty-stricken Bangladesh to be misappropriated by Chinese hackers and transferred to the Philippines, where in turn it was apparently transferred by above-the-law banks to putatively money-laundering casinos, who made it vanish beyond any chance of recovery. We’re not making this up. Mere prose and still images can’t do it justice. And no fiction writer could have imagined a more twisted tale.

The comedy continues if one reads the Zero Hedge blog, which apparently specializes in spreading misinformation of all sorts, including calling a spade a spade when it might not be. Entertaining to most of the world, but not to a few officials during whose watch this debacle occurred or to starving citizens of Bangladesh. 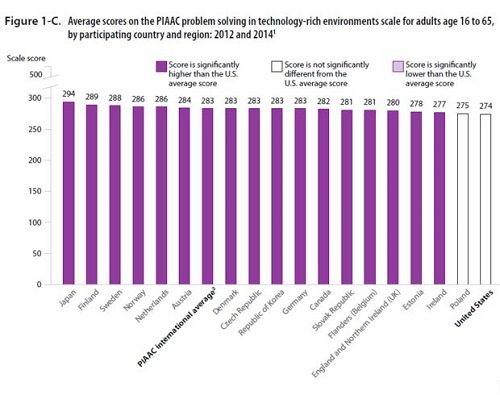 Maybe they couldn’t read the test? We wouldn’t be too surprised about the literacy tests. Nearly all of the other countries have to know a lot of English in addition to their own native languages. That forces them to do a better job of understanding the STRUCTURE of both languages and of thinking in multiple languages. But the technological accomplishments by Americans as a group are so impressive that it is nearly unbelievable that they rank dead last among the 18 top industrial countries according to an OECD report published in 2013. Unfortunately, it is hard to dig into the OECD (Organisation for Economic Co-operation and Development) research and its followup (which appears to be what triggered the Wall Street Journal article at this time) because the background, while numerate, is not presented in a literate manner. We sink into a swamp of academic gibberish.

Professor Andrew Hacker is not surprised at these abysmal results, as he believes that most American high schools and colleges teach math the wrong way. We at Technology Bloopers agree. We survived a lot of advanced math classes up through the masters level and wrote a PhD thesis full of statistical formulae. But most of what we—and most of the American populace–needed to know we learned by the end of eighth grade if we were diligent. Things like fractions and percentages. And some of the rest we might have learned even earlier in school by using Microsoft PowerPoint or Apple Keynote. Do most of us really need algebra? Or geometry (though there are some practical applications of concepts such as the Pythagorean Theorem (e.g., you can check for a square corner by using a tape measure and knowing that if you measure 3, 4, and 5 units on each of the 3 sides that the angle opposite the 5 side is a right angle, i.e., a square corner) even if you have no clue who Pythagoras was). Hopefully, by the time we graduate from high school we will have been exposed to simple column graphs like the one showing the OECD rankings, and have learned that the tiny differences it shows from country to country may not be significant. BUT, the gap between Japan and the Scandinavian countries on the one hand and the U.S. on the other hand probably is significant … and we need to change how we teach math and numbers to Americans.