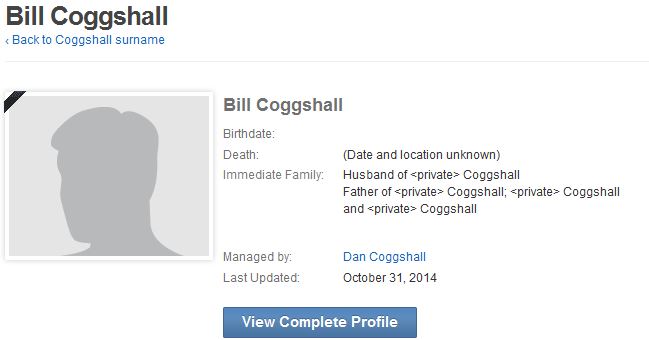 Like Mark Twain, reports of my death have been greatly exaggerated. At least on the geni.com genealogy website. Coggshall is not a common name. Dan Coggshall confirms that he has nothing to do with Geni.com. Apparently Geni.com is just hoping to trick me into using their site. When I click on “Contact profile manager” it just dumps me back at their Home screen where they try to sign me up. Apparently there is no way to actually communicate with them unless you are playing their game. HIGHLY UNETHICAL.

Speaking of unethical, LinkedIn had been triggering regular weekly messages (exactly the same day and time each week) from an acquaintance, using as bait a handful of people who were NOT known to him but LinkedIn claimed they were. Because of this and other nasty games they played I totally quit LinkedIn. I only got a few more messages, all of which I unsubscribed, and this acquaintance’s weekly missives ceased. But a couple of days ago LinkedIn re-started the same game. Apparently the CEO’s “compassion” philosophy does not extend to members or former members of LinkedIn.